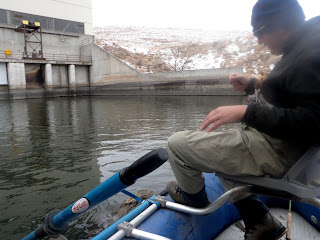 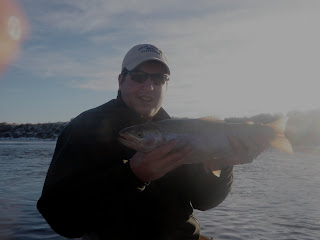 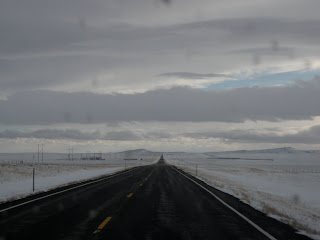 James was in the shop this weekend, so Mike and I headed up to Grey Reef and we had a blast! Keep checking the website, as I feel a destination trip to the Reef could be in the works this spring in partnership with Trent and his crew at Grey Reef Fly Shop. These guys know the Reef better than anyone (they live on it), and beyond all else--they're some pretty awesome guys. Make sure when you're up there you stop in and give them your support. They are always more than willing to give you the straight scoop on what's working. 307-232-9128

Friday we decided to fish below Alcova as the Reef had a few people on it. Below Alcova they had the water almost completely shut off.  Usually below the outlet the water is ripping way to hard to really be effective with anything other than some heavy artillery spin gear.  I know there are big fish that sit in this spillway so today was our shot.  We dumped the raft in right above the wooden bridge and rowed up to the outlet.  I tied on a sculpzilla with a rusty pine squirl leach behind it. I was making long cast up all the way to the face of the dam, and then slowly stripping back.  First cast--wham!  18 inch bow.  We caught several fish in that 16-20 inch range but didn't come up with the North platte  behemoth I was looking for. Below the alcova outlet.  Note: if the bell rings for water release get the F outta there! Sunday we were going to float Reef to lusby and went by Lusby to check and make sure it was still open--there are a few known spots there of sheet ice that can form--but none today! Amazing what a week of warm weather can do.  If you are going to float it this winter make sure you eye it up at lusby first!  A few days of cold weather will put some sheet ice over it in no time. Weather was perfect all day--50's, no wind, sun.  Couldn't ask for anything better for January in WY.  Fishing was pretty steady--fish were in the tail-outs of runs and far inside seams--to be expected.  Typical grey reef stuff--orange scuds, red annalids on the smaller end 14-18,  black midges 18.  Lots of cookie cutter fish in that 16-18 inch range...a few larger.  Had one beast straiten  a #18 200R.  I love that hook for tying red annelids but size 18 and smaller means you gotta baby em with grey reef fish.  I generally prefer laying the wood to em up there.  It seamed like we would bang one fish in each  run and then notta-- Stick and move.  All and all a great trip!