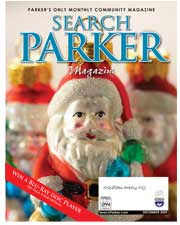 Colorado Skies Outfitters (CSO), Parker’s first and only fly shop and guide service located in Old Town Parker reports that the summer of 2009 was a great season of fishing. "We guided a lot of trips this summer, and we are very grateful for the high level of water and fishing activity. The Fall season was a bit difficult due to the early arrival of Winter weather," said Owner Theo Anest.

CSO conducted several float trips on the Colorado and Eagle Rivers this year as well as various trips on private water. However, the bulk of guided trips occurred on the Douglas County portion of the South Platte River in the Deckers/Cheesman Canyon area. "Living in Parker, we are very fortunate to have the Gold Medal South Platte a scenic 40 minutes from the shop," said Anest

CSO reports outstanding fishing this year despite the unusually wet Summer that made for bigger flows and less than clear water. According to Anest, high flows allowed for bigger food sources to be washed away and made available to South Platte trout on a more regular basis. As a result of the dirtier water, trout were forced to key in on these larger offerings and take advantage of them as they came. "Since the water has once again cleared and we can once again see fish, it’s obvious the Browns and Rainbows packed on some serious size over the summer. In the Deckers area, we are consistently seeing fish in the 18-20" range, with several fish exceeding the trophy 24" mark," said Anest.

Now that temperatures are cooling, the trout who call the South Platte River home are feeding vigorously in preparation for Winter months. For anglers, this means fishing can be excellent throughout the day. Late Fall is not only a good time on the South Platte, but on many other Colorado rivers as well. As Brown Trout prepare for the spawning months, they become very territorial and highly aggressive. For those interested in float fishing with CSO on either the Colorado or Roaring Fork River, even a late Fall/early December outing means throwing big flies that produce smashing strikes from Brown Trout. This time of the year is truly one of the greatest times to fish. "The weather is often still pleasant, the fishing is great, and there is nothing prettier than standing in a Western river when all the others are at home staying warm," said CSO guide James Spicer.

Beyond trout fishing, CSO is also offering guided fly fishing trips for Carp. No, that is not a typo, Carp! "Leave all preconceived notions of what a Carp is at the door. Carp are highly intelligent, very wary fish that require a high level of stealth and finesse in order to catch on a fly. After successfully hooking and landing a carp on the fly rod, no fish requiring some level of stealth will ever feel as challenging again," said Spicer.

With the colder days ahead of us, CSO has in place several fly tying classes which are suited for those new to fly tying as well as more advanced tiers. For more information about tying classes, guided fly fishing trips, special Christmas gift giving or anything pertaining to fly fishing in Colorado, give Colorado Skies Outfitters a call at 720-851-HOOK (4665) and located at 11020 S. Pikes Peak Drive in Parker at the Victorian Peaks building in Old Town Parker. ◊