Going Big and Dirty on the South Platte 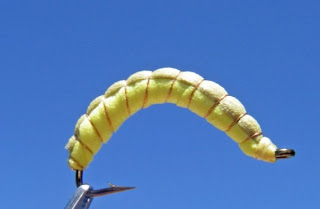 Here is a sneak peak of the upcoming article I wrote to be release in the Next issue of High Country Angler.

Going Big and Dirty in Deckers

In Late July I was on a half day wade and had heard reports the night before of heavy rain in the Deckers area. I expected off colored water but nothing could have prepared me for what I would see when I came down the dirt road from Sprucewood.  The water on the South Platte literally had texture. Late the night before and into the early morning, a torrential down poor had washed out nearly every bank along the river, with numerous slides along Horse Creek between Woodland Park and Deckers. The North Fork was our saving grace that day which miraculously remained clear.

When I returned to the shop in Parker, I was unsure of what would happen to a river recovering nicely from the scars of the Haymen Fire.  The phone starting ringing at the shop with questions as soon as word spread  that Deckers had severely blown out. “How long would it take to clear, Is there any fish kill, when will the road be open again to get to Cheesman?” Answers to people’s questions at that time were as good as mine.

The river above Deckers bridge slowly began to clear but anything below Horse Creek was messy.  This was due to a section of Horse Creek about two Miles above Deckers coined “The Swamp” by Danny Brennan of Flies and Lies. The Swamp filled with debree piles causing the creek to reroute outside of it’s normal stream bed picking up debree and other sediment.  Today the swamp is still a problem and work needs to be done before water entering the South Platte from Horse Creek will resemble anything other than chocolate milk.

A week after the heavy rain storm, we were once again guiding the South Platte around Deckers when most everybody else avoided it like the plague.  When we drove clients by the river upstream to Deckers, our guides and I could feel tension mounting in client’s questions.  Are we really going to fish this river?  Can these fish see an inch in front of their face?  Thanks to a little experimentation, experience fishing other dirty rivers, and a few innovations at the vice to combat the river’s new color, we could confidently answer these questions with a “yes.”

As a guide on the Colorado, Eagle and Roaring Fork, I never shied away from high and dirty water.  In fact, I loved it.  So long as your fly selection does its part to help trout find your offering, high/dirty water makes fish very forgiving of tippet size, less than drag free drifts, and other imperfections.

Even prior to the heavy rain, I began taking a different approach to the South Platte when flows crept above 200 CFS.  Since Hayman, the biomass has turned from tailwater to something of a freestone caddis and stonefly farm.  The number of caddis, the size of the stoneflies, and the overall diversity of bug life drastically increased.  In the weeks before the river went brown and flows were above 200 CFS, we were sight fishing with  a #14 golden stone pattern called a Little Yellow Sloan.  This realistic little stonefly had fish moving three feet to eat on 4x. Fishing the standard South Platte offering of a mercury this, or mercury that in #22 on 6x meant hitting a fish in the face to get an eat. This held true in Cheesman as well.

Once the water went dirty,  I started digging into my Colorado River boxes and found myself tying on some rather large gaudy bugs. Pat’s Rubberleg Stoneflies in # 2-6, three inch long Trusty Rusty Sanjuans, #2-6 Black Buggers, #2 Olive Boo-Faces,  #14 crystal Pheasant Tails, #12 Fly Formerly Known as Prince, and a crane fly I created for the dirty South Platte called the Banana Split became the go-to selection.  Essentially flies our guides and I  never thought we would find ourselves tying onto 2x when fishing the South Platte.  A three fly rig of any of the above mentioned flies under an indicator had fish swinging for the fences and rods bent on a regular basis.

Now that the water has once again cleared, flows have dropped to normal winter levels, and we can see fish again, it’s quite apparent that there was no fish kill of any significance. It’s also obvious that the high flows and dirty water did wonders for the fish that call the Deckers/Cheesman area home.  Big flows meant more large food sources being washed away and available to trout. Furthermore, since the water was dirty, fish had to key in on these bigger offerings that they could actually see.  Finally, the serious reduction in fishing pressure also gave fish a break through the summer.   Through the fall and thus far in the winter, we have seen an encouraging amount of pre-Haymen type fish in the 18-20+ inch range from Deckers to to the Confluence with the North Fork

For the remainder of the Winter, your standard south Platte offerings of #22 pheasant tails, RS2’s,and thread midges will serve you well from Decker’s Bridge up. However, don’t be afraid to go big on days when snow melt puts a tint in the water. Below the bridge, water will remain off color as a result of the “swamp” on Horse Creek. Serving up a Bannana Split, pink worms, and larger than normal winter offerings will produce fish in the off color water through the winter.

As a result of Hayman, the South Platte and it’s surrounding loose sediment banks are still very vulnerable to heavy rain. Spend some times at the vice this winter preparing some dirty water flies that will keep you fishing after heavy rain next summer.